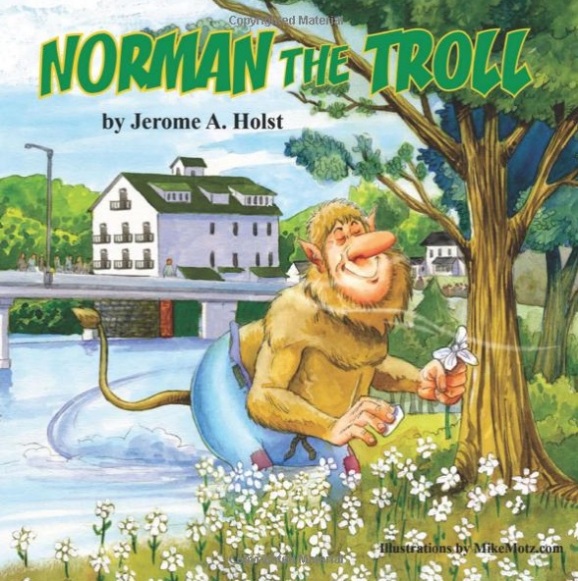 Norman the Troll lives in the Village of Stockport, Ohio. The furry and friendly creature dwells beneath the bridge by the dam on the Muskingum river near the Stockport Mill Inn on route 266.

Originally from northern Ohio, Norman the troll moved to the southeast part of the state after structural engineers declared his former home, a rusty, old trestle bridge, unsafe to the general public.

The engineers demolished the bridge using state of the art explosives and then tossed the broken bits of bridge on barges that carried the remains of the old bridge away.

Now a troll without a bridge is not a troll at all, so Norman packed up his belongings and set out to find a new home.

Following the shoreline of the Muskingum river as it snaked its way south through the Ohio landscape, Norman evaluated a number of bridges along the way, as possible sites for his new home.

Most of them were just too noisy, filled with rumbling trains and trucks. In the end, Norman decided that he liked the gentle roar of the water as it cascaded over the Stockport dam near Lock #6 and so he settled in and set up housekeeping under the bridge.

Norman the troll spends much of the daylight hours sleeping. That’s not to say he won’t come out during the day, but he prefers the dark. At night, he will roam the village, playing in the playground, swinging on the swings and sliding down the sliding boards.

Sometimes for a snack Norman the troll might raid a garbage can for a quick meal. Trolls just love garbage. The smell of rotting refuse is like ambrosia to their noses. When garbage is not at hand, Norman will forage the countryside for wildberries or fish in the river for nice meal of catfish or bass.

So, the next time your in the neighborhood, gently honk your car horn as you drive over the bridge as a friendly gesture of hello to Norman the Troll, the newest resident of Stockport, Ohio.

The books” Norman the Troll” and “Norman the Troll and the Haunted House” were written by Jerome A. Holst, the webmaster and owner of the Enchanted America website. He has since relocated to Greensboro, North Carolina.

Copies of his children’s book are on sale at The Stockport Mill Inn gift shop or on the web through Amazon.com