The Keebler Elves are advertising mascots for the Keebler Cookie Company, the No. 2 cookie and cracker maker. Formerly based in One Hollow Tree Lane in Elmhurst, Illinois 60126, The Kellogg Co. purchased Keebler Foods Company in 2001 for $3.9 billion and relocated the headquarters to Battle Creek, Michigan.

The head Keebler elf is Ernie the Elf who sports white hair, and a business outfit that includes a red hat, white shirt with yellow tie, green jacket, red vest, and yellow pants with red socks. 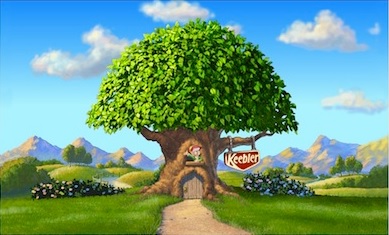 The Keebler Elves were created in 1968 by the Chicago-based Leo Burnett Co., for the Keebler Company. Ernie the elf and his industrious baker elves espoused the “uncommonly good” products from the Hollow Tree Bakery. Ernie was immortalized in fudge when Keebler created E. L. Fudge, a fudge-coated shortbread cookie in the shape of Ernie the Elf.

Note: The Keebler Company was named after Godfrey Keebler, a baker who opened a shop in Philadelphia in 1853. In 1927, the Keebler bakery joined forces with other bakers to form the United Biscuit Company (later headquartered in West Drayton, Middlesex, England.)

In July 2019, Ferrero Group picked up Keebler and several other brands from Kellogg Co. They are now managed by Ferrara Candy, in partnership with Ferrero. Founded as a family business in Alba, Italy in 1946, Ferrero is the third-largest company in the global chocolate confectionary market, with global sales of over $12 billion, distribution across over 170 countries, and a workforce of more than 30,000 people across 55 countries.