Pink Motel is a vintage 1950s style sleepery located in the Smokey Mountains on US 441 at 1306 Tsali Blvd in the town of Cherokee, NC. It is near Harrah’s Cherokee Casino, the Museum of the Cherokee Indian, and the Oconaluftee Indian Village. The motel’s sign sports an image of a winged pixie fairy holding a wand.

As the name of the motel states, the Pink Motel has a vibrant shade of pink covering its exterior. Rooms at this aging but clean 20-unit motor lodge are air-conditioned and have two doors, a front entrance and a back door that exits to a small green space with picnic tables, and grills overlooking the beautiful Oconaluftee River that flows behind the motel. 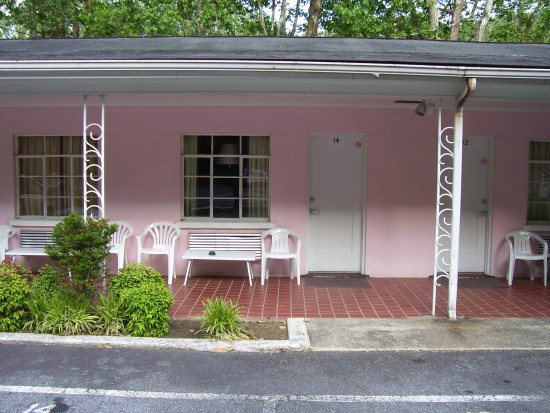 Pink Motel was opened in 1953 by Lois Queen Farthing. The image of a pixie fairy on the motel’s sign was inspired by the owners 11-year-old daughter, Lyna, a fan of Tinker Bell the pixie from the Disney film “Peter Pan.”

NOTE: In 1982, Phyllis Diller and Slim Pickins starred in the film “Pink Motel” wherein they played the owners of run-down motel who wear matching pink shirts and rent rooms to weirdos and perverts.

In reality, there is a Pink Motel in Sun Valley, California, north of Burbank, and has been used many times as a filming location over the years.