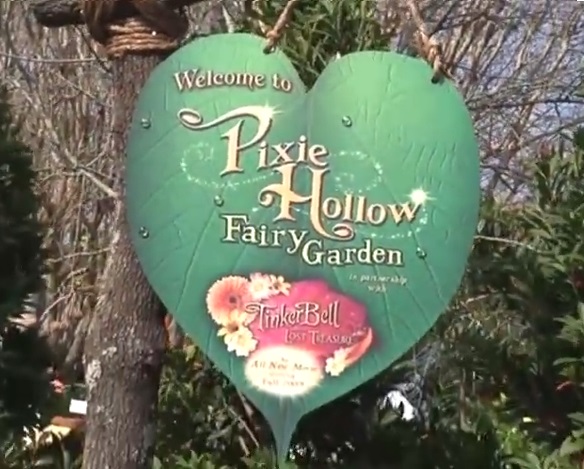 Pixie Hollow Fairy Garden opened in 2009 at Disney World in Florida as part of the 16th Annual Epcot® International Flower & Garden Festival. It was near the entrance of the Mouse Gear gift shop in Future World.

On March 21, 2009, an official ribbon cutting ceremony for Pixie Hollow Fairy Garden announced the new play area for children ages 2-5 and their families. 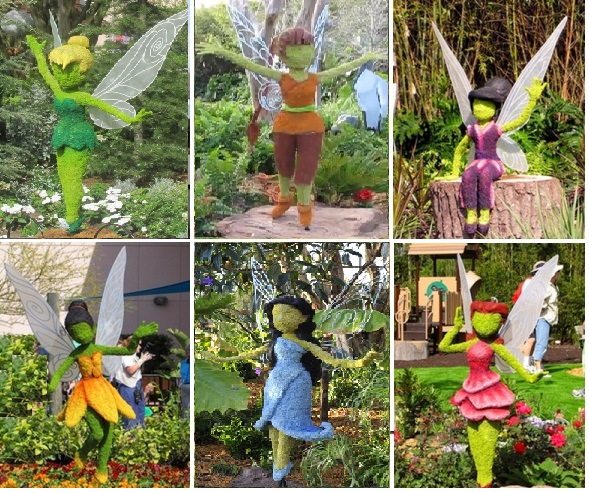 The Fairy Garden featured topiary replicas of Tinker Bell (the best friend of Peter Pan), Fawn (the Nature/Animal Fairy), Iridessa (the Light Fairy), Silvermist (the Water Fairy), and Rosetta (the Flower and Garden Fairy). Also dotting the gardens were the tools and treasures of the fairies as well as a tea kettle fairy house where Tinker Bell lived. 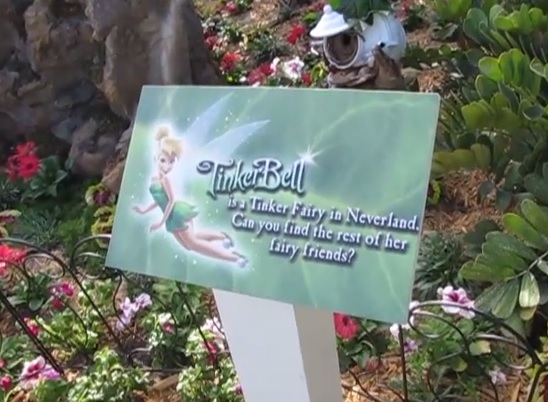 The opening tied in to the direct to DVD animated feature, “Tinker Bell and the Lost Treasure” and later Disney fairy movies, the “Pixie Hollow” animated series, and subsequent spin-off movies.

During the ribbon cutting ceremony five young women playing the part of Tinker Bell and four of her fairy friends Fawn, Iridessa, Rosetta, Silvermist appeared to the crowd but did not talk, because they can’t speak outside of Pixie Hollow. However, after the opening ceremony Tink and her fellow fairies quietly played with the day’s honorary pixies.

Every day at 2 p.m. children are invited to dress in their favorite fanciful frocks and be part of a grand Fairy & Princess Processional through the colorful surroundings.

In 2012, Tinker Bell and her fairy friends returned to the Epcot International Flower & Garden Festival with an expanded Fairy Garden called Winter Woods that offered a white-and-green palette and new texture to Pixie Hollow with its evergreen forest. The Fairy Garden was still open as of 2014. 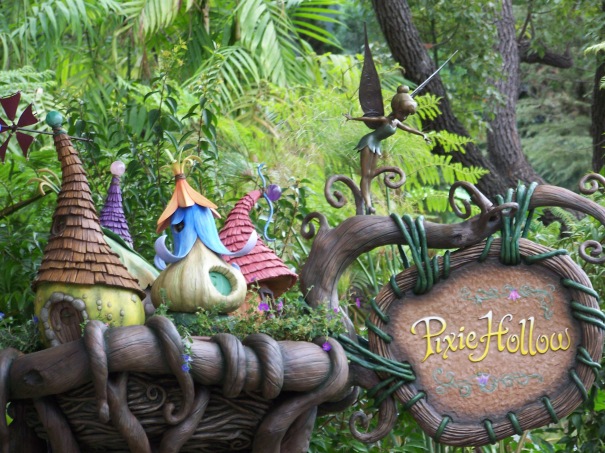 Along with the Fairy Garden, Disney provided children a chance to meet and greet with Tinker Bell and her fairy friends in person.

At Disneyland, a Pixie Hollow meet-and-greet area opened on October 28, 2008, near the Matterhorn bobsleds, where guests are able to interact with Tinker Bell and her companions.

On July 28, 2011, Tinkerbell and her fairy friends returned to the Magic Kingdom at Tinker Bell’s Magical Nook, located at the Adventureland Veranda. Tinkerbell, Vidia, Iridessa, Silvermist, Terence, Rosetta, Fawn, and Periwinkle (Tinkerbell’s sister) were on display. That attraction closed on May 20, 2014, but there is now a new meet and greet area for Tinker Bell minus her fairy friends located in Town Square Theater in Main Street USA.

Pixie Hollow is the secret world where Fairies live and work to create the four seasons to take to the Mainland. The four areas are called Spring Valley, Summer Glade, Autumn Forest and the Winter Woods.

In the original novel by James M. Barrie, Tinker Bell is a fairy and she uses fairy dust, not pixie dust. The transformation from Fairy to Pixie came about with the Disney animated film “Peter Pan” (1953). When Tink was upset, she called people, “Silly Ass!”

“It was a girl called Tinker Bell exquisitely gowned in a skeleton leaf, cut low and square, through which her figure could be seen to the best advantage. She was slightly inclined to embonpoint [plump hourglass figure] .

A moment after the fairy’s entrance the window was blown open by the breathing of the little stars, and Peter dropped in. He had carried Tinker Bell part of the way, and his hand was still messy with the fairy dust.

“Tinker Bell,” he called softly, after making sure that the children were asleep, “Tink, where are you?” She was in a jug for the moment, and liking it extremely; she had never been in a jug before.

“Oh, do come out of that jug, and tell me, do you know where they put my shadow?”

The loveliest tinkle as of golden bells answered him. It is the fairy language. You ordinary children can never hear it, but if you were to hear it you would know that you had heard it once before.

Tink said that the shadow was in the big box. She meant the chest of drawers, and Peter jumped at the drawers, scattering their contents to the floor with both hands, as kings toss ha’pence to the crowd. In a moment he had recovered his shadow, and in his delight he forgot that he had shut Tinker Bell up in the drawer.”