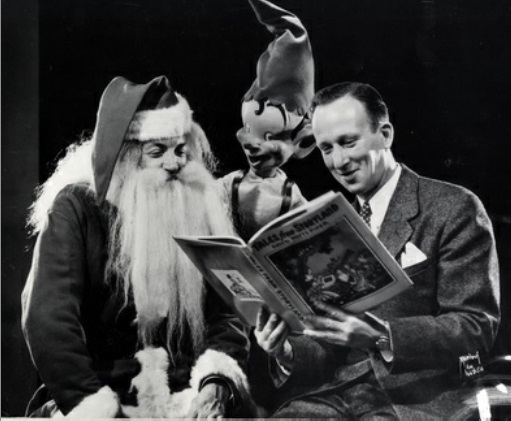 “Is it time for Billie the Brownie?” – a question asked by thousands of children during the Milwaukee holiday season.

Beginning on November 8th 1931, about ten days before the big parade on Thanksgiving weekend and running up until Christmas eve, Billie the Brownie hosted a 15-minute radio program (dial set to AM 620) at 5:00pm, seven days a week. Billie the Brownie entertained the children of Milwaukee for 24 years until the show’s last broadcast on Christmas Eve in 1955. 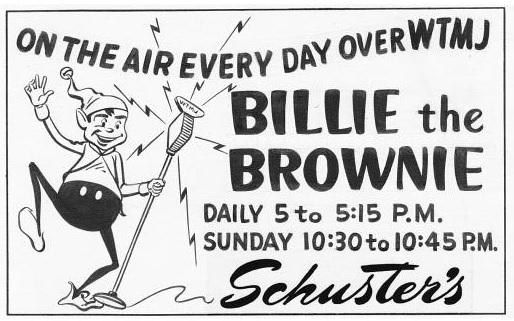 The program began with the toot of a tin horn and the recorded voice of the Shannon Four singing “Jingle Bells.” Then came the announcement, “Hello, boys and girls. This is Billie the Brownie coming to you live via a WTMJ radio at Schuster’s Department store in Downtown Milwaukee.”

Each day, Billie the Brownie read updates from the North Pole that tracked the Santa’s progress as he readied his reindeer sleigh and the toys to be delivered to the boys and girls in Milwaukee area and beyond. Sometimes Billie communicated to the North Pole by short-wave radio and sometimes, Santa himself visited the show. Mrs. Claus also made an appearance from time to time.

The daily program also included the reading of a story book, as well as a segment where Billie and his pal “Captain” Larry Teich (who wrote the scripts for the show) would read letters to Santa sent by area children. For example: “….and here we have a letter from little Bobby (or Betty) Jones of 44 N. Kramer Street in Milwaukee….” Letters to the program were simply addressed: “Billie the Brownie c/o Schuster’s Department Store.”

The letters were drawn from a large drum located at Schuster’s Brownie Toyland section of the store and read on the air each day. For every letter sent, a post card was sent to the sender with the message:

“Dear [name of child], Santa, Me-Tik, Reindeer and Schuster’s wish you a Merry Christmas. We all enjoyed reading your letter and hope to see you [at Shuster’s] before Christmas. Love, Billie the Brownie.”

As for the storytelling on the program, children were asked to stand before the radio and shout, “I have been good” so Santa’s Magic Storybook would open. To open the book, a gong sounded and then Billie would say, “Abra-cadabra!” Sometimes the book did not open, and sparks of guilt consumed some child out there in Radioland who knew he or she was responsible. A favorite story year-after-year was one called “Why Christmas Trees Are Always Green.” 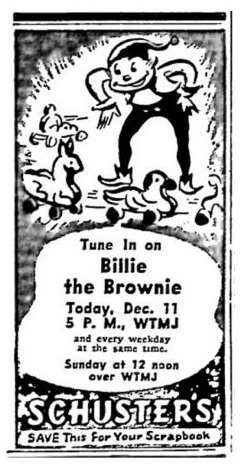 Billie also received “Billie’s Peeper Report” – information gathered by peeping brownies who visited children’s home to see who was naughty and who was nice. If a child was not behaving or disobeying their parents like remembering to clean their rooms or be nice to their sibling, Billie the Brownie just might report that to Santa Claus. And you know what means: No presents for Christmas.

Clever parents used the ploy of having a conversation on the phone with caveats to Billie that their children were being naughty. Of course, the children overheard the conversation and immediately seguewayed into nice mode.

Other characters on the program were Me-Tik, Santa’s silent Eskimo “Reindeer” Drover, and Willie-Wag-Tail, who was always barking in the background on the show. Santa took the dog along in case he encountered a dog in one of the houses he visited. Willie-Wag-Tail would tell the dogs to be quiet as Santa went about his business.

Shortly before Christmas each year, the program’s radio transmissions would “break-up” (on purpose). Then Santa who had seemingly lost his way would tell the children listening, “Alright Boys & Girls pray hard and be especially good so Santa can find his way!” 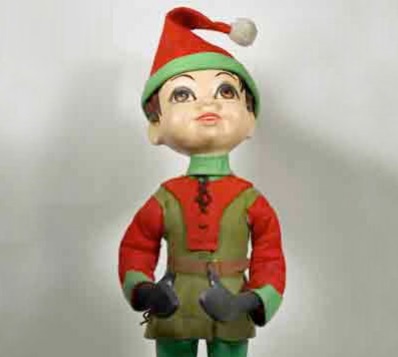 On Christmas eve, it became a tradition in Milwaukee for children – before they went to bed – to leave a bone for Willie Wagtail, milk and cookies for Santa, bubble gum for Billie and sugar for the reindeer.

Billie the Brownie and Me-Tik still appeared in the annual Christmas parade through the 1960s and Gimbel’s resurrected Billie the Brownie in 1973 where he has played an important role in the department store’s Breakfast with Santa program. 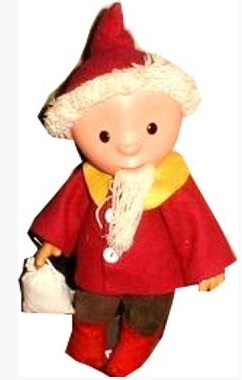 In 2011, in recognition of his 80th birthday the Milwaukee County Historical Society unveils its holiday exhibition, Milwaukee of Christmas Past: Schuster’s & Billie the Brownie.

Over the life of franchise, Billie the Brownie appeared in parades, in store windows and even holiday parties hosted at the Milwaukee Press Club. In fact, in 1927, the first year of Schuster’s Reindeer Parade, a crowd of 100,000 people came out to see Santa, Me-Tik, Billie the Brownie, and other characters.

In 2006, Doris Alaimo-Melillo authored the children’s book, “Dori Mae and her Friend Billie” (Published by Premium Press America) that captures the magic of the days when Billie the Brownie reigned supreme during the holiday season in Milwaukee, Wisconsin.

NOTE: Noted Milwaukee broadcast journalist Carol Cotter provided the voice of Billie the Brownie from the late 1940s through the end of the series run. Cotter died in 2011 of complications from a stroke in Teaneck, N.J. She was 92.

Prior to Cotter, others had voiced Billie the Brownie, including, Frank Barron in 1931; and from 1943-1945, 16-year-old actress Sari Ross performed Billie’s high-pitch voice.

In 1962, Gimbels purchased Schuster’s Department store. This created a retail company called Gimbels-Schusters with eight stores and 4,000 employees. After two years, “Schusters” was dropped from “Gimbels-Schusters” name. Schuster’s flagship store is now a vacant building on Martin Luther King Drive. Founded in 1887, Gimbels, once the largest department store chain in the country, went out of business in 1987.