Mothman is a supernatural creature with glowing red eyes and large wings allegedly seen in Point Pleasant, West Virginia in the Mason County.

The legend of the Mothman began on November 15, 1966 at 11:30 p.m. when four teenage youths were cruising in a 1957 Chevy. As they pulled along the TNT area (an abandoned ammunition’s dump dating from World War 2), they saw two bright red eyes and a winged-shaped figure that looked like a man.

Grayish in color, it shuffled along the road and then flew away at a very high rate of speed. The couples panicked and sped away into the night. The next day they reported the incident to the local newspaper and the myth of the creepy, woodland spirit was born. 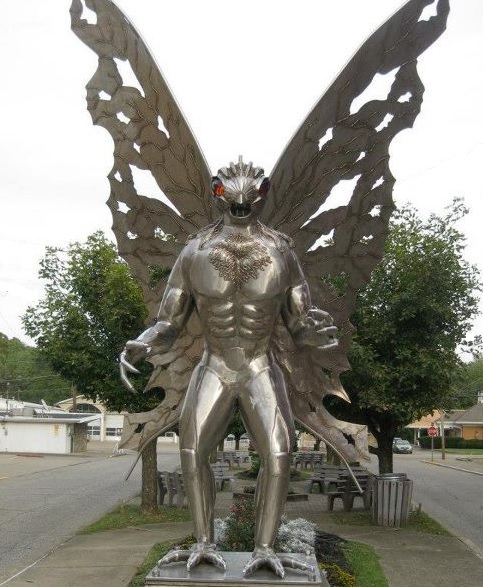 The most reasonable explanation for “Mothman” is the mistaken identity of a Sandhill crane bird walking along the roadside. The red eyes easily explained from headlights reflecting in the bird’s eyes.

The entire Mothman hullabaloo culminated when the Silver Bridge (built 1928) collapsed on December 15, 1967. The disaster resulted in 31 vehicles falling in the river, killing 46 and injuring 9.

The suspension bridge’s eye-bar joint and weld design failed, and consequently, the other chains were overloaded and snapped causing the collapse of the bridge that spanned the Ohio River between Point Pleasant, West Virginia and Kanauga, Ohio.

There are those who don’t believe the collapse of the bridge was the result of bad design or worn parts and thus theories about the bridge’s structural failure abound. They include:

The Silver Bridge was replaced in 1969 by the Silver Memorial Bridge, a much stronger cantilever structure carrying US Route 35 traffic across the river.

Some say the Mothman appears when a tragedy or attack is going to happen. He was reported the day of the bridge collapse, has been seen flying around burning buildings and was seen on the day of the World Trade Center. Since the 1960s, there have been Mothman sightings all over the world.

The Mothman, aka the “Mason County Monster” has now become a legend. An annual weekend-long Mothman Festival celebrating the power of the myth began in 2002. A 12-foot-tall metallic statue of the creature, created by artist and sculptor Bob Roach, was erected in Point Pleasant in 2003. The Mothman Museum and Research Center at 411 Main Street, Point Pleasant, WV opened in 2005.

The Mothman connection with the bridge disaster was recounted in the books by John Keel, “Operation Trojan Horse” (1970) and “The Mothman Prophecies” (1975). In the first book, Keel states he received a phone call from an alien warning of the coming disaster, and in the second, he attributed the prophetic warning to an entity known as the Mothman.

In 2002, Richard Gere starred in “The Mothman Prophecies” that follows events leading up to the collapse, including encounters with the Mothman.