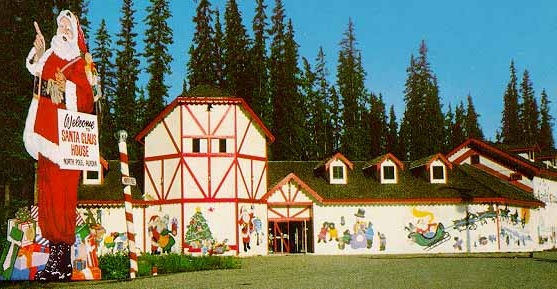 Originally a frontier general store/trading post and post office founded by Nellie and Con Miller in 1953, the Santa Claus House expanded over the years to become one of the North’s most famous travel destinations. Here, kids can sit on Santa’s lap, or help feed four of his reindeer that live outside in a pen.

According to legend, a youth mistook the white-bearded Con Miller as Santa while he was building a new house. Soon after, the Miller’s changed the name of their trading post to Santa Claus House and decorated it to look like Santa’s residence.

Today, the huge 9,000 square Santa Claus House gift shop is filled with all sorts of toys and Christmas merchandise, including a life-size nativity scene, a 6-foot plush moose and polar bear, and many themed Christmas trees.

Fabricated in the 1960s by Wes Stanley of Stanley Plastics for Seattle’s Westlake Mall, the 900-pound fiberglass statue found its way to the North Pole in 1983.

In addition, the Santa Claus House receives letters to Santa Claus sent by children all over the world. For decades, the Millers acting as Santa’s Elves have promptly sent more than two million personalized letters back to the boys and girls anxiously awaiting a response from the jolly old elf. 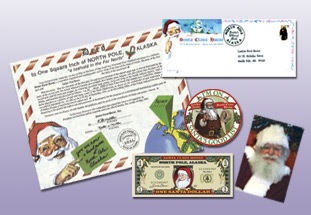 During your visit to the gift shop, you can order a letter sent to your child or grandchild. Each letter includes a note on stationery (unchanged since the 1960s), a Santa Claus dollar, a photo of Santa, and a sticker reading “I’m on Santa’s Good List.” You can even purchase the deed to one square inch of the North Pole.

Street lights are decorated in candy cane motifs and many buildings are painted with Christmas colors and designs. The city’s firetrucks and ambulances are all red, while the police cars are green and white. And there is a red-and-white striped “North Pole” pole in the town park.

During the Christmas in Ice Carving Contest, 500 tons of ice are carved from a nearby pond with chain saws and transported to the Ice Park for ice sculptors from around the world to carve holiday-themed sculptures, as well as to build an ice maze, and a life-sized ice slide for families to slide on. The holiday season starts with a candle lighting ceremony and tree lighting event the first Sunday in December.

For those who make the trip to visit the real-life North Pole, there are three real-life white-whiskered men who don the big red suit to play the role of St. Nick, including Thomas Patrick O’Connor, the president of the local chamber of commerce, who legally changed his name to Santa Claus. That’s right, he even has a driver’s license that proudly identifies him as the North Pole’s number one man.

NOTE: In the 1950s, The Dahl and Gaske Development Company bought the Davis Homestead who homesteaded the area in 1944. The land was then subdivided and named North Pole, with the hopes that the name would attract the toy industry to manufacture articles made in “North Pole.” Upon changing the town name from Davis to North Pole in 1953, North Pole, Alaska adopted the slogan, “Where the Spirit of Christmas Lives Year Round.”

The soft-spoken painter Bob Ross (1942-1995) who lived in North Pole, Alaska for over a decade stated on his TV program (“The Joy of Painting”) that the scenery surrounding the town was of great inspiration for his work.

And there is also a town called North Pole in New York State.