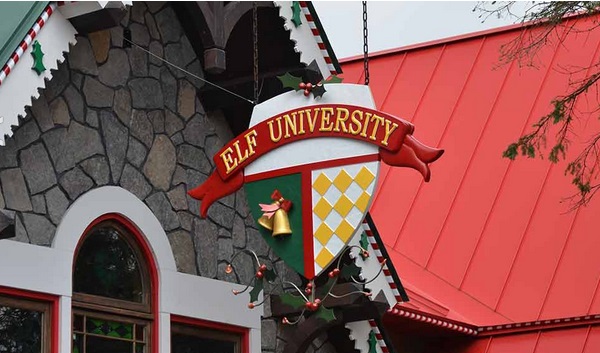 Elf University is an attraction at Santa’s Village, a Christmas-themed amusement park located along Presidential Highway in Jefferson, New Hampshire.

Previously, in my post ShadowQuest, I wrote about a scavenger hunt style game where kids played a high-tech game with infra-red magic wands where they search for crystals and other artifacts to gain powers to defeat an evil Shadowlord. Well, in this post children who visit Santa’s Village play a low-tech game that enables them to gain powers of a different sort, the power to learn their ABCs.

They do so at Elf University, a learning center that offers a game that gives visitors to the park a chance to reinforce their basic knowledge of the alphabet. The name of the game is “Elfabets.” It is free to play.

To participate, children get a personalized card on a string from Elf University. The card has a Christmas tree made up of every letter in the alphabet. One letter for each of the elves in the Santa’s Village game. 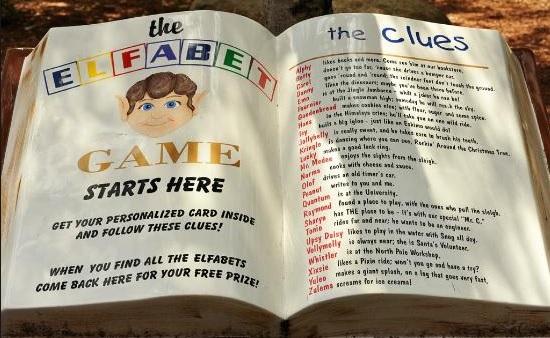 Clues to where the elves are located are found in the Clue Book that shows an alphabetical list of all the elves by their names. Next to their name is a clue as to where the elf might be. For example, the elf named Zulema “screams for ice cream” which tells the player to look for a place selling the cool, creamy dessert.

When a child arrives at a statue of elf, they read the name of the elf and then insert their card into a slot in the gift that each elf holds. The child then pulls down a lever that punches out a letter that stands for the first letter in the elves’ name, for example “T” for Tonio.

When all 26 elves are found and the player’s card is properly punched, they return the card to Elf University and receive a reward. like a pin or magnet and a diploma that declares: “I found all the letters in the Elfabet Game at Santa’s Village.” Participation is not limited to children. Adults are welcomed to play as well.