Logan the Leprechaun is the official mascot for the St. Pat’s Day celebration at the Five Points Festival in Columbia, SC. The event is listed as the third largest St. Patrick Day in the country.

Throughout the town, Logan the Leprechaun is seen on billboards, posters, T.V. and walking around Five Points during the celebration dubbed a ‘surprisingly Irish’ weekend. 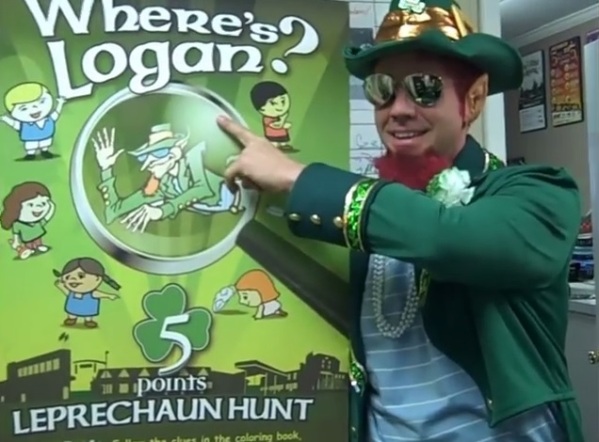 Logan the Leprechaun comes in two forms: a human who dresses the part and interacts with the boisterous crowds, and small bronze statues placed within the Five Points District for tourists and locals for find during the “Where’s Logan Leprechaun Hunt.”

These bronze version of Logan hide in the Five Points area year round. Sometimes Logan will be visible – and in some places only his head is peeking out or he may have left a pair of shoes behind. He’s hiding in six locations. 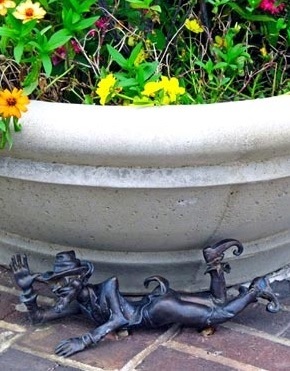 To find Logan, six clues are provided in the form of poems – one clue for each location.

Here are a few sample clues to help you hunt for the elusive Leprechaun who hides in plain sight.

Leprechauns are thirsty, fans of the drink
But their habits are unusual, folks often think
They remove their shoes, curled toes on the stoop
And enter the pub for their Guinness and soup
(Hint: Delaney’s Irish Pub at 741 Saluda Avenue)

Logan’s feet have grown weary; he has traveled so far,
From bathtubs on roofs and stops at the bar
A new pair of footwear shall ease his pain
The old pair of slippers has been put out in the rain
(Hint: Good for the Sole Shoes and Accessories at 631 Harden Street)

The St. Pat’s Day features the greening of the Five Points Fountain when local children help pour dye in the fountain to give its water that special St. Patrick’s Day hue. The celebration also sponsors the Battle of the Bands, and a Get to the Green 5K Run and 1 Mile Walk, the Midland’s largest road race! Awards are given to all runners and walkers, as well as the Best Dressed Leprechaun!