The Flying Unicorn was a kiddie roller coaster ride at Universal’s Islands of Adventure 110-acre theme park in Orlando, Florida. Set in an enchanted forest, the Flying Unicorn carried its passengers in trains designed to look like unicorns wearing a knight’s armor.

To access the ride, you walked through an Enchanted Forest full of gnarled and stunted trees and past a fence made of twisted iron and crooked wood. As you worked you away along the queue, there were signs explaining the backstory of the ride.

It seems once upon a time, an ancient wizard found a baby unicorn, who shed its horn (which they do only ever thousand years). With scraps of wood from magical castles and metal from witches’ cauldrons, the sorcerer used the magic from the unicorn’s horn to create The Flying Unicorn ride. As legend has it, once the wizard found a unicorn’s horn and placed it on the front of the cart, it came to life and starting soaring over the forest. 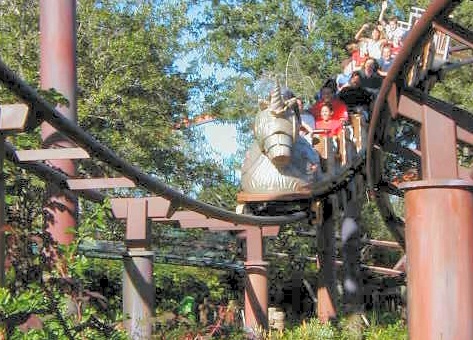 Once you boarded your unicorn car, you were taken on a slow climb up the hill to the first drop. After that there are a series of dips and turns as you ‘fly’ around the treetops at a maximum height of 40 feet. The ride reached a top speed of 23 miles per hour and only lasted about a minute. Riders between 36” and 48” tall had to be accompanied by an adult. The ride had 2 trains with 8 cars per train. Riders were arranged 2 across in a single row for a total of 16 riders per train.

The Flying Unicorn debuted on June 29, 2000 in the Lost Continent section of the park. In July, 2008, the Flying Unicorn was closed and rethemed into a new ride called the “Flight of the Hippogriff” which opened in June, 2010 as part of the official opening of the Wizarding World of Harry Potter.

The refurbished ride was used as a training tool for young wizards to teach them how to fly a Hippogriff (a legendary creature which resembles a winged horse with the head and upper body of an eagle) under the care of Hagrid, one of the instructors at Wizard School.

You reach the roller coaster, you first walk through Hogwarts Grounds, past Hagrid’s Hut and to the Forest where you will eventually meet Hagrid for a “Care of Magical Creatures Class”. It is here you learn how to approach a Hippogriff by nodding your head. Once you’ve mastered the “Nod,” you take a test flight which takes young wizards soaring and swooping over the Forbidden Forest, a pumpkin patch and Hagrid’s Hut. 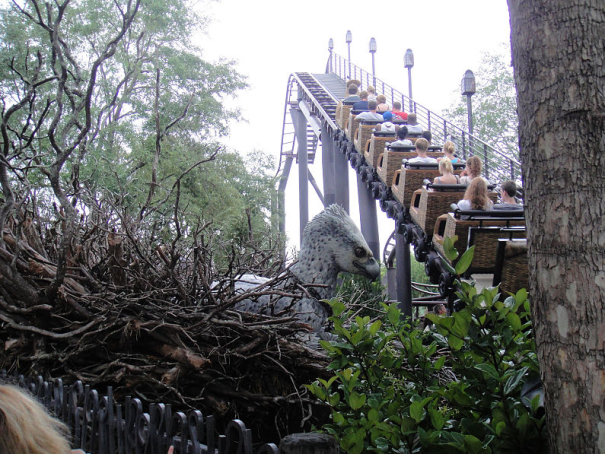 The front of the wicker roller coaster car is shaped like a Hippogriff creature. As the roller coaster ascends the tracks, there is a nest made of branches wherein you will see an animatronic version of a Hippogriff called Buckbeak. As you pass the creature, (seen in the Harry Potter movies) you nod your head to indicate your respect and peaceful intention.