The Dragon and Knight sculptures are located at 719 5th Street on the east side of State Route 135 in a park by the Art Center in the city of Crested Butte, Colorado between 6th and 7th streets at Red Lady Avenue.

Designed by Sean Guerrero, the statues of a medieval knight and snarling dragon are fabricated from three tons of recycled chrome taken from late-model automobiles and other recycled objects like discarded appliances and light bulbs. The dragon sculpture is 15 feet tall and has a wingspan of 23 feet. 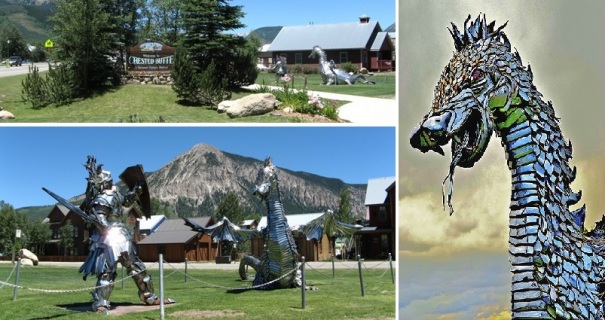 Metal Sculptor Sean Guerrero, a former industrial welder, started sculpting full-time in 1981. His clients have included Kirk Douglas and Jack Palance. Besides statues, his work ranges from usable furniture to wind-blown sculptures, and sci-fi stuff like robots and aliens. A resident of both Denver and Crested Butte, Guerrero wintered in the Bordeaux region of France.

Some of his other works include a bull elk standing along U.S. Highway 50 in downtown Gunnison, in front of a real estate office (It measures about ten by ten with an eight-foot wide antler spread); a chrome mare and colt located in front of a home North of Gunnison, west of Highway 135 toward Ohio Creek; the ten feet tall and ten feet long “Spirit of the West” horse in front of the Poncha Springs Truck Stop; and an eagle with a 13-foot wingspan who resides at a jewelry store in Sedona, Arizona. In addition, his “winged lady in chrome” sculpture sold to a memorial garden and soon was featured as “Winged Woman on a Prayer” in National Mortician Magazine.

The artist’s prices range from $1,000 to $30,000, depending on how involved the project is. Sculpting a horse takes about three months, an eagle about two. Smaller projects average six weeks.

Guerrero donated many of his sculptures to selected causes, such as: Open Space, Adapt-a-Sports which raises money for handicapped skiers, and Jimmy Carter’s Habitat for Humanity.

NOTE: The idea of knight fighting a dragon comes from the legendary story of St. George the Dragonslaver. Once a dragon terrorized a kingdom. When it had eaten all of its livestock, lots were drawn to send a human as sacrifice to keep the Dragon in check and not harm the rest of the people in the realm. When the daughter of the king was chosen as the next sacrifice, the king objected but she was still given to the Dragon. But before the dragon could harm the fair maiden, a knight appeared and pierced the heart of the demon beast, thus saving the princess from the jaws of death.

In Christian history, St. George was a high-ranking Roman soldier who refused to carry out the orders of the Emperor Diocletian to hunt down and kill those who believed in the Son of God. Consequently, he was killed, but his death became an inspiration for those to battle injustice and seek to uphold truth at all cost.

St. George is the Patron Saint of England and represents the forces of Christianity battling pagan ideology.