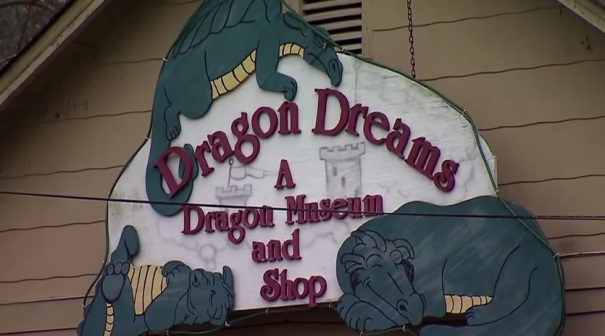 Dragon Dreams Museum and Gift Shop was located at 6724-A East Brainerd Road in Chattanooga, Tennessee. The museum is now closed due to the death of Barbara Newton, the museum’s owner/curator. 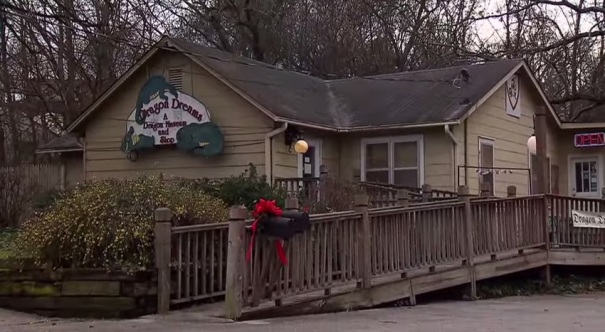 Opened in 1991, the one-story museum housed a unique collection of thousands of dragons of all types which the owner had accumulated since the late 1970s. Newton began collecting dragons in 1976 after encountering a friend’s figurine while visiting California over a Thanksgiving break.

Her dragons reflect cultures from around the globe. The dragons from the Western cultures tend to by fire-breathing monsters and dangerous reptiles, while the ones from the Eastern cultures are considered wise and beneficent.

“Dragon Dreams is not a natural history museum. It is an artistically inspired collection from the realms of imagination and mythology.” – Barbara Newton

The eleven-room museum contained a maze of galleries that displayed dragons of every size, shape and color from modern fantasy dragons to medieval style dragons to exquisite oriental designs. Dragons were made of wood, silver, jade, ivory, pewter, porcelain, and fabric.

Newton, a veterinarian by trade, retired in 2011 and sold her practice so she could devote her time to her museum which was open from Wednesday through Saturday 10 am to 6 pm , Sundays 1 pm to 6 pm. Closed on most holidays.

There was no charge to browse in the store which has some excellent dragon items for sale. Per their website, “As always, the gift shop is admission free, smoke free, and full of Dragon Goodies.”

The collection was considered to be the largest dragon collection in the world. Before her death, Newton had begun the paperwork to be included in the Guinness Book of World Records. Newton had hoped to find someone to take over the collection, but no credible offers surfaced. Consequently, at her demise, the entire collection was liquidated by her friend, Denise Furland who was designated as the executor of the estate.

When Barbara Newton died in February, 2014, the museum was shuttered and a “Closing Soon” sign was placed on the building. Newton had been diagnosed with pulmonary fibrosis in 2010, and given five years to live.

NOTE: Update on the Museum:  Shelby Burns and her husband, George purchased the Dragon Dreams Museum from the Newton Estate on October 1, 2014 and are relocating it to a new location in downtown Chattanooga Tn. They hope to keep Barbara Newton;s legacy alive and will pursue the Guinness Book of World Records in her name after reopening. The Burns are currently looking for a building to hold the vast collection and are hoping to be reopened by April of 2015. Please follow their updates on Facebook.