Kelly’s Leprechaun is the unofficial mascot of a Kelly’s Logan House, the oldest Irish Bar in Delaware. It is located in Trolley Square (the interection of Delaware Avenue and Dupont Street) at 1701 Delaware Avenue in Wilmington, New Castle County, Delaware. 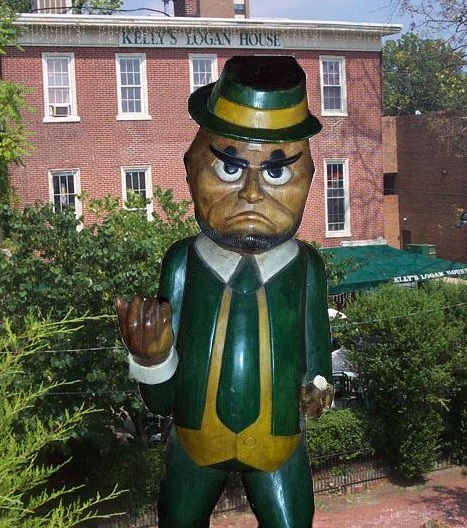 Constructed of mahogany, the wooden statue is 3-feet tall, weighs 100 pounds and strikes a boxing pose for all those who visit Kelly’s Logan House (aka, “LoHo”), a Delaware Landmark featuring great food, music, and atmosphere. Daily drink and food specials are available seven days a week.

Over the years, Kelly’s Leprechaun statue has been battered and vandalized. Once, someone removed the statue’s arms and left them leaning against the front door a few days later. Another time, rowdy members of a bachelor party tried to steal the statue, but they were caught before they could drive away in their limo bus.

In February 2007, however, Kelly’s statue “was” stolen from the premises. In an effort to get the statue back, management promised not to “bust skulls or lock anyone up” but rather offered any tipster a gift certificate for $200 and a card entitling the person to no cover charge for life. Sadly, there were no takers and the bar’s mini-mascot was never returned.

Here are a few remarks from those who responded to the theft of the Leprechaun:

“I hope that the perpetrators of this heinous act realize their mistake and return the little guy unharmed (or at least take him on a trip around the world and send pictures).”

“The legend of the logan house leprechaun is that it is a real leprechaun who has been turned into a statue and would remain that way until the day comes when the world is populated by idiots. by reading the news journal comments and blog comments i would say that day is here.”

“The Logan House leprechaun seems to look a lot like the mascot to a certain Catholic university in the Midwest that is known for its football team. Maybe they finally decided to enforce the trademark rights!”

Two months after the statue was stolen, a new one was donated by the man (Arrend Hussey) who made the original. Hussey, a Newark businessman was the owner of BigBronze.com that sold bronze and wooden statuary. As of 2014, the second statue, despite being chained to the wall, was reported stolen and has not been replaced.

NOTE: Built in 1864, the Logan House was named after Civil War General John Alexander Logan. The historic hotel once provided comfort for weary travelers coming from the Baltimore and Ohio railroad station located across the street. In 1889, John D. Kelly purchased the hotel and the Logan House has been in the Kelly family ever since. In the 1930s, the Hotel closed and only a restaurant and tavern remained in operation. Kelly’s Logan House was added to the National Register of Historic Places in 1980.

There is also a Logan’s Irish Pub at 414 South Main Street in Findlay, OH 45840 (not affiliated with the Delaware one).