Annabelle the Doll is a haunted Raggedy Ann doll stored in a special glass case in the Occult Museum of psychic investigators Ed and Lorraine Warren in Monroe, Connecticut. 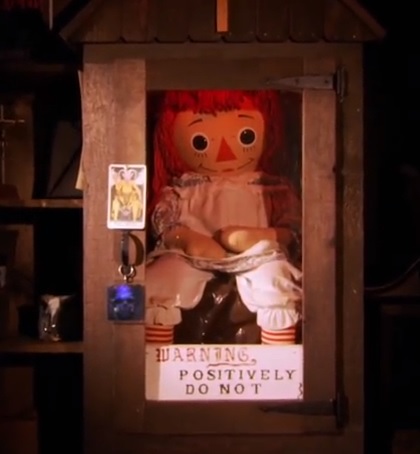 The doll originally belonged to a nursing student named Donna whose mother purchased the doll as a birthday gift when she found it in a hobby store. At the time, Donna was sharing an apartment with Angie, a fellow nursing student.

When the doll began to leave messages written on parchment paper with pleas like “Help Me,” Donna and Angie sought help from a medium. A séance revealed that the doll contained the spirit of a little girl named Annabelle Higgins, whose murdered body rested beneath the soil of the apartment complex. Alone and friendless, the spirit of the girl asked if she could remain with Donna and Angie. They agreed to let Annabelle stay with them, but soon, even stranger things began to happen.

One day, Donna’s friend Lou was napping in the apartment when he had a horrible nightmare that Annabelle tried to strangle him to death. Soon after, Lou found claw marks on his chest and so the girls contacted an Episcopalian priest who then recruited renown paranormal investigators, Ed and Lorraine Warren. They discovered there was never a ghost of a little girl, but rather a demonic presence who wanted to possess the body of one of the college students.

After conducting an exorcism on the apartment, the Warrens removed the doll and placed it among a collection of other haunted objects housed in a small occult museum within their home. While transporting the doll to their house, the Warren’s experienced strange forces that caused their car’s power steering to fail, their engine to cut off and their brakes to fail. The disturbances stopped when Ed Warren sprinkled holy water on the doll.

Visitors to the Warren Occult Museum are warned not to taunt or challenge the spirit within the doll, because if they do, harm will come to them. Once, a motorcyclist visited the museum and told the doll he did not believe it had powers, and if it did, it should do something to him. On the way home, the man crashed into a tree and died. 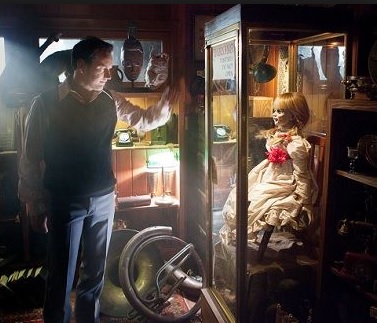 NOTE: In 2013, Hollywood released a film called “The Conjuring” that followed the exploits of Ed and Lorraine Warren in the 1970s who were asked to investigate an old home in the country whose current residents were being terrorized by the spirit of a woman who was hung on the property.

Throughout the film, Annabelle the doll is mentioned and seen. The doll in the film was not a Raggedy Ann doll but rather a more gruesome looking doll used for dramatic effect.

In 2014, the prequel film “Annabelle” tells the origins of the demonic pig-tailed doll who threatens a young couple and their newborn baby.