The Faery Door was located at the base of an elm tree in the Concourse of Golden Gate Park near the DeYoung Museum and Academy of Sciences in San Francisco, California.

Measuring 12-inches tall, the arched wooden door mysteriously appeared around Valentine’s Day in February of 2013. At first, Andy Stone from the San Francisco Parks department reported “the elf door” will remain for now” but soon after the whimsical door was removed because it was ruled the door was a violation of city code.

A short time later, it was discovered that the door was crafted by native Tony Powell (47), the son of a carpenter. Tony and his 6-year-old son, Rio, who live on a sailboat in the bay, affixed the door on the tree because they felt the hollow opening at the roots of the tree should have a proper entrance.

The day after finding the tree, Powell returned to carefully measure and trace the shape of the tree’s doorway and then copies the doorway’s outline onto a piece of scrap pine, cut it out and sealed it. Powell then mounted the door to the tree using small brass screws to penetrate the bark.

Shortly after, the faery door attracted the attention of the public who left notes (“I like cheese cake”; “Is the Tooth Fairy real?”, Can elves predict the future?”) and offerings of food and drawings for the enchanted inhabitants who allegedly come and go from the tree. 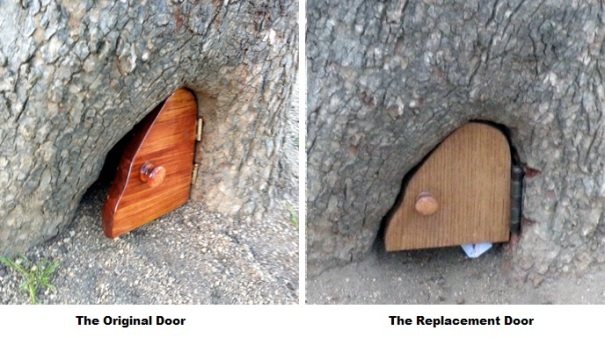 After the original faery door was removed because the city claimed its hinges with small brass screws damaged the tree, complaints from the citizenry prompted city officials to replace the door with a temporary one described as a “pale imitation of the original.”

Meanwhile, Tony Powell crafted a polished, circular door made of pine named “The Faery Sanctuary” and attached it (with the city’s approval) around Labor Day to a fallen eucalyptus log, so as to not damage any living trees. 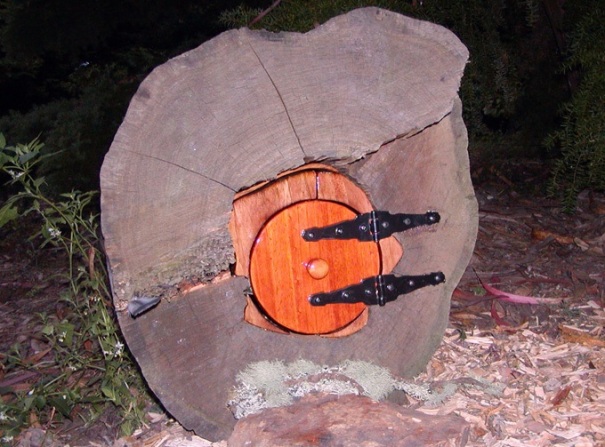 The new door, installed at the end of a fallen eucalyptus log, opens to a hollowed out three-foot space where visitors can leave gifts and notes for the tree’s otherworldly inhabitants. Unlike the first door, the new one features knobs on both sides. The addition, Powell said, was one he and his son hadn’t considered before:

“The knob on the inside allows the Faeries to pull the door shut from the inside and was something we had thoughtlessly neglected in our previous door.”

To get to the new faery door “Go west from the original fairy door, though not quite due west since that would take you into the Japanese Tea Garden,” Powell said. “It’s around the other side of the garden, then down a little ways. There’s a little trail and on it you’ll find a rather long eucalyptus log, about 16 or 18 feet long, under a yew tree. It’s on the westward end of the log.”

Powell has petitioned the city to allow the replacement door on the original tree to remain, since so many people still visit that door every day and not a lot of people know about the new one. Powell hoped the old door could be used as a mailbox for the fairies.

NOTE: There was another tiny door at the base of tree on Cedar Street near California in Berkeley, CA. It disappeared soon after it was attached to the tree.