The Geller Cup is the family trophy seen on the third season No. 9 episode “The One with the Football” of the NBC sitcom FRIENDS (1994-2004). 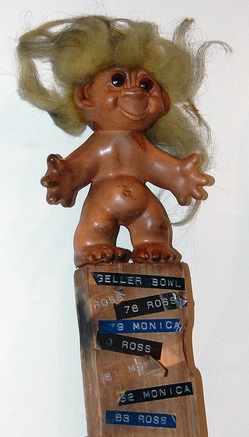 The Geller Cup was a Troll doll nailed to a 2 x 4 piece of wood and awarded to the member of the Geller family who won the annual touch-football game known as The Geller Bowl.

During Geller Bowl VI, Ross Geller (David Schwimmer) & his sixteen year old sister, Monica (Courteney Cox) got so aggressive that Monica elbowed her brother in the face and broke his nose.

Fearing their competitive nature was getting out of hand, their father threw the Geller Cup in a lake and their mother forbade them to play football ever again.

The award resurfaced 12 years later on Thanksgiving day 1996 (Monica had retrieved it from the lake long ago) and both Monica and Ross were once again hot and heavy to win the fuzzy yellow-haired troll trophy and prove once and for all, who was the best player.

At the end of the episode, both Ross and Monica fall to the ground and grab for the football in play. But neither of them want to admit defeat, so they stubbornly refuse to let go of the football, even as the sun goes down and it starts to rain.

During the new game Ross chided his sister saying “cheater, cheater, over eater.” For his trouble, Ross got his nose busted.

NOTE: The Geller Cup is on display in the Warner Bros. Museum on the studios’ lot in Burbank, California. For a month in 2014, the Geller Cup was on display at the Central Perk coffee shop pop-up in So Ho New York.