Spot the Dragon is a large, green fire-breathing dragon seen on the CBS horror comedy THE MUNSTERS (1964-66).

Spot is the family pet of the Munsters, a family of monsters, vampires and werewolves who live at 1313 Mockingbird Lane in Mockingbird Heights, USA.

It was vampire Grandpa Munster (Al Lewis) who discovered Spot while digging in the back yard. Now the fire-breathing creature lives under the staircase of the Munster home. Spot has battle-axe scares on his left shoulder

Spot was rarely seen but for its large tail and portions of its face when it breathed fire. When Spot wasn’t eating its favorite pet food (Doggie’s Din Din), it had a bad habit of eating the neighbors’ trash can lids.

Once Lily Munster (Yvonne DeCarlo) said “Eddie, you go tell Spot that if he eats any more cars, we’re gonna rub his nose in the transmission.”

On episode No. 51 “Underground Munster” Herman Munster (Fred Gwynne) chastised Spot for tracking mud into the house. Feeling hurt, Spot ran away from home and hid in the sewer system which caused panic in the city. 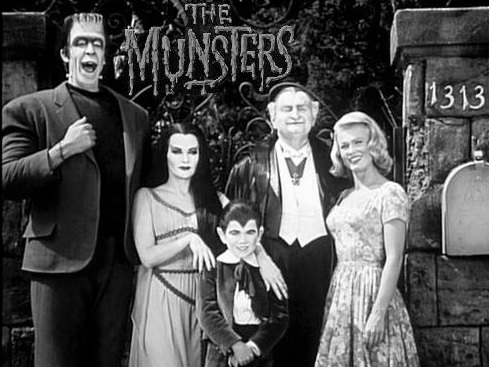 NOTE: In his book, “The Munsters: Television’s First Family of Fright” by Stephen Cox (Contemporary Books, 1989) Butch Patrick and Al Lewis discussed the origins of Spot.

Butch claimed Spot came from props left over from the movie “One Million B.C.” (1940). Al Lewis disagreed, saying, “Fred and I designed Spot. We were the ones who decided the family needed a pet. Fred’s a great artist so we got together and came up with Spot. The prop department built him for us. What does Butch remember. He was twelve.”

Other sources claim that Spot the Dragon creature was actually a revamped special effects prop left over from the Universal International movie “The Land Unknown” (1957) starring Jock Mahoney about an expedition that stumbled upon prehistoric monsters.