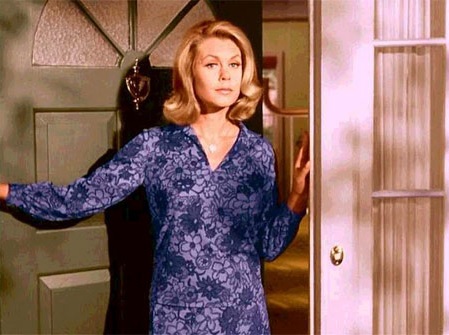 Samantha Stephens is a beautiful blonde witch (Elizabeth Montgomery) married to Darrin Stephens (Dick York/Dick Sargent), an advertising executive who lives in the suburbs of Westport, Connecticut at 1164 Morning Glory Circle on the ABC fantasy comedy series BEWITCHED (1964-72). They have two children, (Tabitha and Adam) both of whom inherited supernatural powers.

Born on June 6th on the eve of the Galactic Rejuvenation and Dinner Dance, Samantha’s fate was to fall in love with a mortal human named Darrin Stephens who works as an advertising executive for McMann and Tate ad agency in Manhattan.

Samantha reluctantly revealed her witchy powers on their wedding night. Later, Darrin confided with his bartender “My wife’s a witch. What’ll I do?” The bartender, not understanding the full truth behind his statement answered “You oughta see MY wife.”

To placate her mortal husband, Sam [as Darrin calls her] promised to live as a mortal and not to use witchcraft [including time traveling, seeing the future and reading minds]. But she was often unsuccessful in this endeavor.

When something went wrong Samantha said “Oh, my stars! or “Witchcraft got you into this mess; I see no reason why witchcraft shouldn’t get you out of it.”

Despite her husband’s wish for Sam to eschew her witchcraft, she couldn’t help but be reminded of her heritage from the many enchanted relatives who popped into their Connecticut home from time to time. They included:

Whenever Sam wanted to contact her relatives, she didn’t need a telephone. All she had to do was shout their name into the air such as “Mother!” and the aforementioned relative usually appeared at Samantha’s request.

To her credit, Samantha tried her best to curtail her usage of witchcraft. But there were times Sam just couldn’t help herself, and had to use a touch of witchcraft to solve the problem at hand. When Sam executed a spell, she quickly twitched her nose.

“We are quicksilver, a fleeting shadow, a distant sound. Our home has no boundaries beyond which we cannot pass-we live in music-in a flash of color. We live on the wind and in the sparkle of a star.”

Unfortunately, it was always at such time Gladys Kravitz, the Stephen’s nosy neighbor across the street came a peeking in the window or sneaking into the yard to see the results of one of Sam’s or her relative’s enchantments.

Gladys, of course, went rushing back home to her befuddled husband, Abner who thought that his wife was just plain nuts. Fortunately, for Sam, she always found a way to camouflage her magical mistakes, thus leaving Gladys looking like a liar or at the very least, someone who needed to go home and get some rest.

A sample of spells cast for good or mischief in the Stephen’s household included:

Sam’s husband, Darrin was often the target of many of the spells cast by Endora. Over time, he was turned into a chimp, a mule, a werewolf, a goose, a pony, a parrot, a goat, a gorilla, a toad, a statue, a crow, a dog, an invisible man, and a little boy. If it wasn’t for his eternal love for Samantha, Darrin would surely have left her.

Years later, (on the spin-off series TABITHA/ABC/1976-1978) Samantha’s children, Tabitha and Adam Stephens left their hometown of Westport, Connecticut and traveled to California. There, Tabitha and Adam (now just a mortal and no longer a warlock) found employment at TV Station KLXA. Tabitha got hired as the television production assistant for “The Paul Thurston Show.” When necessary, Tabitha used her witchcraft to solve problems, much to her disapproving brother, Adam. Keeping an eye on the two siblings was their meddlesome but well-meaning Aunt Minerva (Karen Morrow) who encouraged Tabitha’s use of witchcraft.

Meanwhile, back in Connecticut, Samantha still tried to keep her promise to avoid using witchcraft while Darrin continued to work for McMann and Tate. 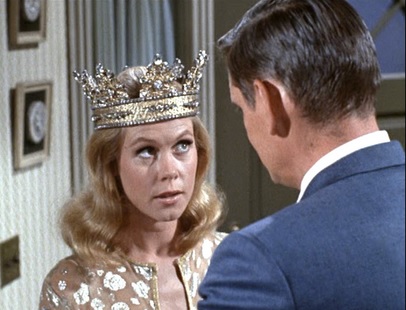 Of course, Endora, Maurice and the rest of the Samantha’s relatives were still there to tease, or torture Darrin when they felt slighted by his human antics. Luckily, Sam, who was once crowned The Queen of the Witches, was still there to rescue him when they did.

Bewitched, bewitched,
You’ve got me in your spell.
Bewitched, bewitched,
You know your craft so well.
Before I knew what you were doing,
I looked in your eyes.
That brand of woo that you’ve been brewin’
Took me by surprise.
You witch, you witch!
One thing that’s for sure,
That stuff you pitch,
Just hasn’t got a cure.
My heart was under lock and key,
But somehow it got unhitched.
I never thought my heart could be had.
But now I’m caught and I’m kind of glad
To be bewitched. Bewitched.

NOTE: The Bewitched series ran 254 episodes. It is also known as “The Witch of Westport” (original script title) and “The Witch of Westwood” (working title), The proram aired in black and white (1964-1966) and color beginning in 1966. Starting with episode No. 192 “Serena Stops The Show” (02-19-70), Serena was listed in the credits as Pandora Spocks, a reference to the Greek myth of Pandora, an evil being created by Hephaestus out of clay at Zeus’ command.

In 1994, to hype its “Block Party Summer” programming, the producers at Nick at Night asked viewers to vote on whose powers were greater, Samantha the Witch (Elizabeth Montgomery from BEWITCHED/ABC/1964-76 or Jeannie the Genie (Barbara Eden) from I DREAM OF JEANNIE/NBC/1965-70. When the votes were tallied Samantha won receiving 810,938 votes to Jeannie’s 614,882. 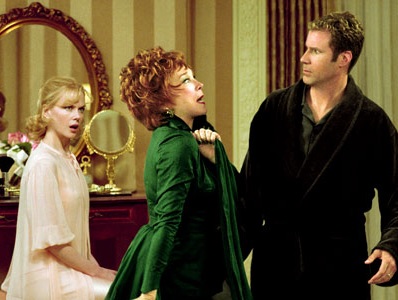 Nicole Kidman and Will Farrell as Samantha and Darrin Stephens with Shirley McClaine as Endora appeaered in the movie remake of “Bewitched” released in 2005.

A reproduction of a classic Rembrandt painting the “Girl with a Broom” painting hung on the wall of the foyer (to the left) as you entered the home of Darrin and Samantha Stephens.