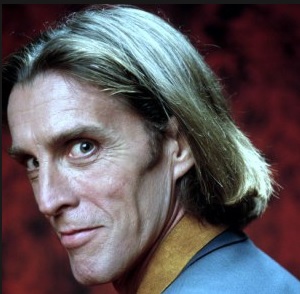 The Devil is a heavenly angel who fell from God’s grace and now rules the kingdom of Hell on the FOX fantasy drama BRIMSTONE (1998-99).

As the keeper of lost and evil souls, it is the Devil’s job to imprison and punish his wards in assorted environments, like lakes of fire.

Now with all those souls to watch over The Devil is bound to lose track of a few. Case in point: recently 113 souls had slipped through his fiery grip and escaped Hell.

To solve his problem, The Devil (John Glover) enlists a recent arrival, Ezekiel Stone (Peter Horton), a cop killed on duty after murdering his wife’s rapist.

Feeling generous, The Devil makes a deal with Ezekiel: return the escaped souls and gain a chance at redemption If Ezekiel retrieved the escapees, he could win a “Get out of hell” card and enter into heaven with his wife. 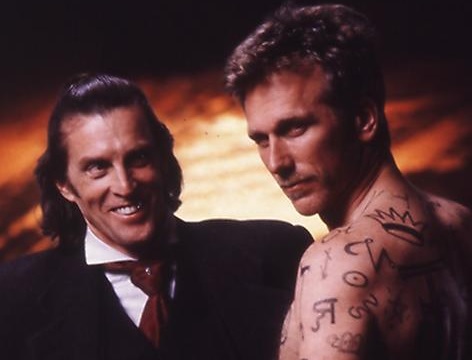 Before Stone left hell the Devil tattooed 113 cryptic signs on Stone’s body. Each sign representing one of the escaped souls.

To guarantee, each soul would return to hell, Ezekiel was instructed to destroy their eyes (for the “eyes are windows to the soul”). Each time Stone destroyed a set of eyes, a screaming soul reluctantly raced back to hell. At the same time, one of the tattoos on Ezekiel’s body disappeared.

And from time to time The Devil dropped in on Ezekiel and shared his thoughts.

The Devil: I have always advocated family values, all the way back to Cain and Abel.

The Devil: Please, Ezekiel. My job’s not to decide who lives and dies. My business is with the soul. And I have never damned a soul who didn’t thoroughly deserve it. Mother Nature is a completely different story. She kills indiscriminately, good and evil alike. Why she gets all the good press, I’ll never know

The Devil: Vanilla? Where’s the waitress? I only eat Rocky Road.

The Devil: You know, before they invented the elevator, I had to walk all the way from hell.

The Devil: Yes, yes, now that’s what I like to hear. The indomitable spirit and righteous indignation of the human species. I’ve heard it a million times defending a billion atrocities, and it’s still music to my ears.

The Devil: Everyone’s in such a rush. I say, stop and smell the burning flesh of sinners.

The Devil: I never loved anyone but God, and that was a long time ago.

NOTE: The Devil as a character has made cameo appearances on a number of shows including HIGHWAY TO HEAVEN, TOUCHED BY ANGEL, THE TWILIGHT ZONE (as Mr. PIP) and even FANTASY ISLAND but it wasn’t until BRIMSTONE that The Devil truly became a star. But the Devil wasn’t the first in his family to get a Hollywood contract.

In 1977, the Son of Satan (Gabriel Dell) starred in the supernatural comedy A YEAR AT THE TOP/CBS/1977. It told the tale of Greg (Greg Evigan) and Paul (Paul Shaffer). two rock musicians from Boise, Idaho who were offered a deal by Frederick J. Hanover, a Hollywood music agent who happened to be the Son of the Devil. Their deal: rock super-stardom in exchange for their souls. Despite the temptations, the rockers continually resisted Hanover’s offers and refused to sign the “contract.”

Another show to feature the Devil in a starring role was GOD, THE DEVIL & BOB/NBC/2002. This animated comedy followed the misadventures of Satan (voice of Alan Cummings) and his henchman Smeck (Jeff Doucette) as they tried to tempt an autoworker named Bob Alman. Apparently, God was dissatisfied with how the world had progressed so far and wanted to destroy it. As an experiment, he allows the Devil to choose one human to and see if he was truly worthy of saving. Now the fate of the world rests on the shoulders of poor Bob and the members of his family. Oh boy, there goes the world!

And, on the CW Network fantasy comedy REAPER (2007-2009) Ray Wise appeared at The Devil. The plot followed the misadventures of Sam Oliver (Bret Harrison) who discovers on his 21st birthday that his parents had sold his soul to the devil before he was born and now he must be in the service of Satan as a bounty hunter until he dies.

Here are some of The Devil’s aliases throughout time and society:

Brimstone (IMDB)
God, The Devil and Bob (IMDB)
Reaper (IMDB)
A Year At The Top (IMDB)