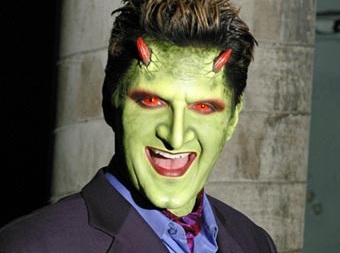 Lorne comes from an alternative dimension called Pylea where he is known as Krevlorneswath of the Deathwok clan. But on planet earth good old “Krev” is just “Lorne,” the owner of a Los Angeles-based bar known as “Caritas,” where friendly demons hang out and participate in the establishment’s karaoke entertainment.

Lorne can sing like an angel and sustain a note for like, forever. Sometimes, Lorne’s uses his voice as a weapon against other demons.

On Lorne’s home world, nobody sings, so it was wise for him to leave and share his pipes with people who appreciated his vocal talents.

At club Caritas, when anyone gets up to sing, Lorne has the ability to see into their “Aura” to sense a person’s problems and possible destiny. This mind-reading ability comes in handy for local vampire private eye named Angel (David Boreanaz) who visited the bar to get Lorne’s help.

Sometimes, Angel sang for Lorne so he could “divine” needed information, but the experience of hearing Angel’s perform off-key renditions of Barry Manilow’s “Mandy” to a karaoke beat was excruciating to say the least. But, it had to be done so Lorne could come through with the INTEL. 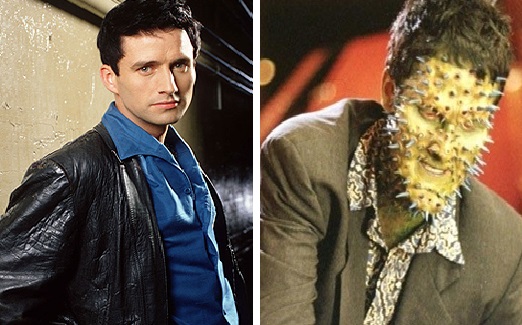 Another demonic member of Angel investigation team was Allen Francis Doyle (Glenn Quinn), a psychic demon who saw people in trouble before the fact.

Doyle was born in 1970 in Dublin, Ireland, to a human mother and a Brachen demon father, whom Doyle never knew. Doyle’s demonic genes/abilities didn’t manifest themselves until he was 21 years old

His visions aided Angel in saving many innocent lives. Doyle sacrificed his life to destroy a deadly machine constructed to harm other demons like himself.

Before he died, he passed his ability to see “visions of impending evil” onto Cordelia Chase (Charisma Carpenter), a member of Angel Investigations (with whom Doyle had a crush).

Finally, one demon to lookout for is Sahjhan (Jack Conley), a tall, ugly and evil time-traveling demon who is bent on killing Angel.

He has unsuccessfully enlisted the aid of an 18th century vampire hunter, Daniel Holtz (Keith Szarabajka) and Lilah Morgan (Stephanie Romanov), a top lawyer with the demonic law firm of Wolfram and Hart.