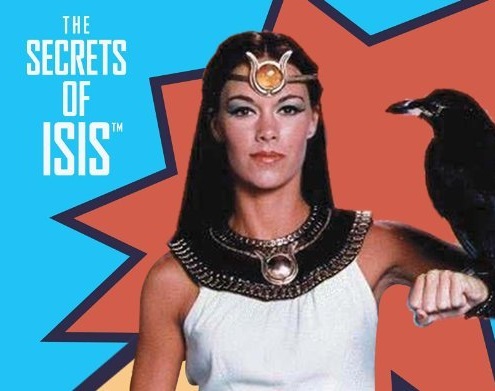 Isis is an ancient Egyptian goddess featured on the CBS fantasy adventure THE SECRETS OF ISIS (1975).

While on an expedition to Egypt high school science teacher, Andrea Thomas (JoAnna Cameron) found an amulet once owned by an Egyptian Queen some 3000 years ago.

“With this amulet you and your descendants are endowed by the goddess Isis with the powers of the animals and the elements. You will soar as the falcon soars, run with the speed of gazelles and command the elements of sky and earth.” – Narrator

Designed by a royal Egyptian sorcerer, the amulet possessed the power that enabled her to soar with the birds; to communicate with animals; and to master the elements of earth, sea and sky.

When Andrea held the amulet and spoke the words “Oh, mighty Isis” she became an indestructible super-heroine dedicated to fighting evil. The amulet was shaped like the letter “U” with a circular jewel stone resting in its center. 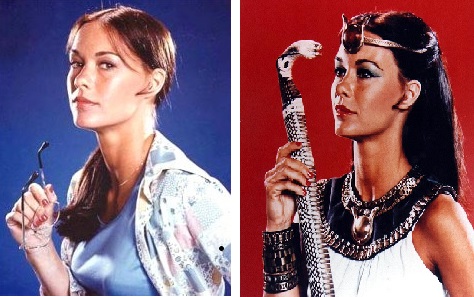 To perform a task, Isis chanted rhymed spells like “O zephyr winds which blow on high, lift me now so I may fly.” Isis’ tiara amplified her normal vision.

NOTE: Isis also appeared in the CBS animated cartoon series FREEDOM FORCE (1978) produced by Filmation and aired as a segment of TARZAN AND THE SUPER 7 where Isis gathered a group of superheroes to battle evil around the world.

Based in the Valley of Time, the team members included Merlin the Magician, Sinbad the Sailor, Super Samurai – alter ego of Toshi, a young Japanese boy, and Hercules, a member of the SPACE SENTINELS (1977), an NBC cartoon series where Roman mythological figures Hercules, Mercury, and Astrea form a superhero team to protect mankind.

From 1975 until the end of its run, THE SECRETS OF ISIS was a companion program on THE SHAZAM!/ISIS HOUR.