The Magic School Bus is an enchanted vehicle used to transport children at Walkerville Elementary on adventures on the PBS animated children’s program THE MAGIC SCHOOL BUS (1994-1997).

Miss Valerie Felicity Frizzle (Lily Tomlin), a teacher at Walkerville Elementary is the driver of the bus who uses the Magic School Bus to teach her students about the world around them and illustrate the science concepts she discusses in class.

When Ms. Frizzle wants to teach the children about the ocean, the bus coverts into a submarine and travels beneath the waves. If the topic is rocket science the bus can turn into a spacecraft to explore the vastness of outer space and learn about planets and asteroids. 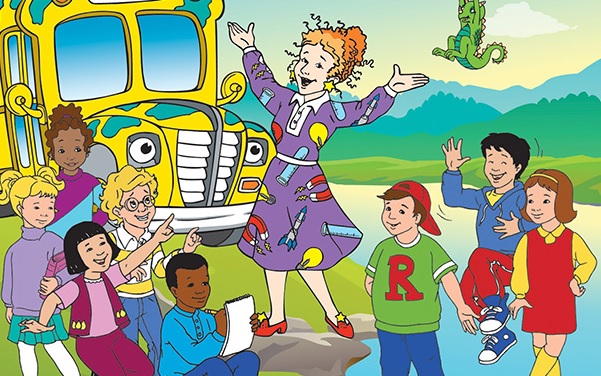 Regular passengers on the Magic School Bus include a group of multi-ethic students from Walkerville Elementary. They include:

Also along for the ride was a lizard pet named Liz (a Jackson’s Chameleon) who went on most of the field trips with Ms. Frizzle and the students.

Sing along with the theme song!
Ride on the Magic School Bus

Cruisin’ on down Main Street
You’re relaxed and feelin’ good
Next thing that you know you’re seein’
Octopus in the neighborhood!

Surfin’ on a sound wave
Swingin’ through the stars
Take a left at your intestine
Take your second right past Mars.

NOTE: The series was based on the books written by Joanna Cole and illustrated by Bruce Degen. The series theme song is sung by 1950s rocker Little Richard. Lyrics written by Peter Lurye.

In 2016, Netflix and Scholastic Media announced an updated version of the series entitled THE MAGIC SCHOOL BUS 360°. The 26 new episodes will be in CGI.