In reality, Diane Prince (Lynda Carter) is a member of a race of immortal Amazon warriors from Paradise Island (located at 30 degrees 22′ North, 60 degrees 47′ West).

“There are no men here. It is free of their wars and barbaric ways. We live in peace and sisterhood.” – Queen Hippolyte

Wonder Woman possesses the beauty of Aphrodite, the wisdom of Athena, the strength of Hercules and the speed of Mercury.

Delivering Trevor safely back to a hospital in Washington, DC, Princess Diana disguises herself as a Naval Yeoman First Class Diana Prince and assists Steve in his fight for democracy.

Before departing Paradise Island, Diana’s mother Queen Hippolyte says, “Go in peace, my daughter. And remember, in a world of ordinary mortals, you are a Wonder Woman.” 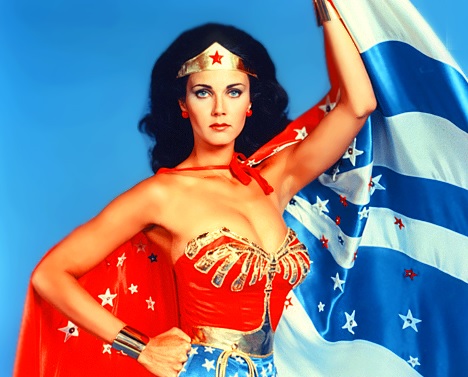 When trouble occurs, Diana spins rapidly in a circle which transforms her civilian clothing into her Wonder Woman costume, the colors of red, white and blue.

Her arsenal of weapons includes: 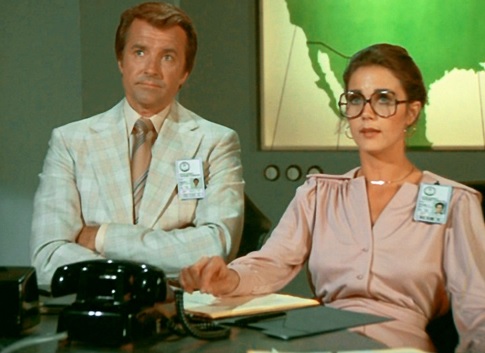 After the war, Diana returns to Paradise Island, but reappears in the mortal world in the 1970s where she works incognito for the Inter-Agency Defense Command (IDAC) battling Modern-Day terrorists. Steve Trevor, Jr., the spitting image of his father whom Wonder Woman was so attached to 30 years before, was her cohort at the agency.

Wonder Woman, Wonder Woman.
All the world’s waiting for you,
and the power you possess.

In your satin tights,
Fighting for your rights
And the old Red, White and Blue.

Wonder Woman, Wonder Woman.
Now the world is ready for you,
and the wonders you can do.

Make a hawk a dove,
Stop a war with love,
Make a liar tell the truth.

Wonder Woman,
Get us out from under, Wonder Woman.
All our hopes are pinned on you.
And the magic that you do.

Stop a bullet cold,
Make the Axis fold,
Change their minds,
and change the world.

“Gathered together from the cosmic reaches of the universe, here in this great Hall of Justice, are the most powerful forces of good ever assembled: SUPERMAN! BATMAN AND ROBIN! WONDER WOMAN! AQUAMAN! And The Wonder Twins: ZAN and JAYNA, with their space monkey, GLEEK! Dedicated to prove justice and peace for all mankind!”

In the “Wonder Woman” comic books that inspired the TV series the substance “Feminum” was called “Amazonian.”

Wonder Woman was created by Charles Moulton, the inventor of the Lie Detector Machine (which inspired Wonder Woman’s magic lasso that forces people to tell the truth).

According to the comic history, Wonder Woman was immortal as long as she remained on Paradise Island. If she left the island, she would lose her immortality and began to age (but at a rate slower than normal mortals).

Everything that Wonder Woman is comes from the soil of the Paradise Island because Wonder Woman was created from the clay of Paradise Island when Queen Hippolyte who longed for a child was instructed by the goddess Aphrodite to mold the image of a child from the island’s clay. The clay form was imbued with life and Hippolyte named her child Diana after the Roman name for Artemis, goddess of the hunt. Wonder Woman received her immortality when she drank from Paradise Island’s fountain of eternal youth.

The one caveat of the island: No men allowed. Why? Well, according to legend some says that a huge tidal wave will engulf the island if men visits the island while another suggests that the God Zeus will reign down thunderbolts to blast the island to cinders, if a man ever set foot on the island.

The true reason is revealed in Wonder Woman No. 216 when Queen Hippolyte tells female superhero Black Canary (a.k.a. Dinah Lance) that men are forbidden on Paradise Island because “any Amazon seeing a man standing on their island will instantly fall hopelessly in love with him. So much so, in fact, that they begin to fight among each other until the peaceful and loving Amazons are reduced to barbarians.” When the Black Canary delivered her report to the Justice League, she left out the secret she learned.

In the 1974 Made-for-TV-Movie “Wonder Woman” Cathy Lee Crosby played Diana Prince, a super-hero who uses her powers to thwart an international spy ring.

In the 2011 Made-for-TV-Movie “Wonder Woman” Adrianne Palicki played Diana Prince who worked as a corporate executive when not fighting crime as Wonder Woman.

Actress Gail Gadot is scheduled to star in the movie “Wonder Woman” in 2017.