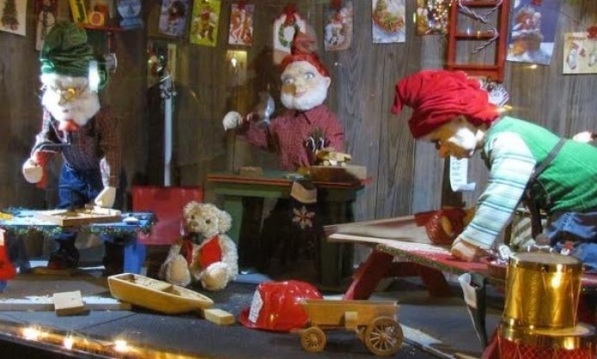 The Woods-Palsen Elves are three animated mechanical figures holding a saw, drill and hammer displayed in the front window of Tarrant & Harman Real Estate and Auction Co. at 252 South Side Square in Carlinville, Illinois.

First seen in the 1960s, the elves were originally on display at the Woods-Palsen Appliance Company window on West Main Street.

A tradition for years, the Woods-Palsen Elves were a sign to the citizens of Carlinville that the Christmas season had begun. As soon as the elves appeared in the window, local children pushed their noses and tiny fingers against the glass to watch the elves, cut, drill and hammer away in their workshop.

After the death of Dennis Palsen in 2000, the elves were packed away. In 2016, the elves were rediscovered and then completely restored by Diane Van Winkle, aka “The Elf Doctor” for another generation of family and kids to enjoy.

With the help of volunteers, Van Winkle, a graduate of Blackburn College, set about to getting the elves back in working condition by reinforcing their deteriorated bodies with fiberglass and then sanding, painting and clothing the figures. Parts replaced included worn gear motors, broken arms and hands.

To supplement “A Carlinville Christmas” other animated holiday characters were added to storefronts in the area. Ron Young, owner of Cherry Tree Treasures & Gifts, 236 East Side Square, features an animated elf in his business’ window, holding a sign that says “Merry Christmas on Illinois US 66.”