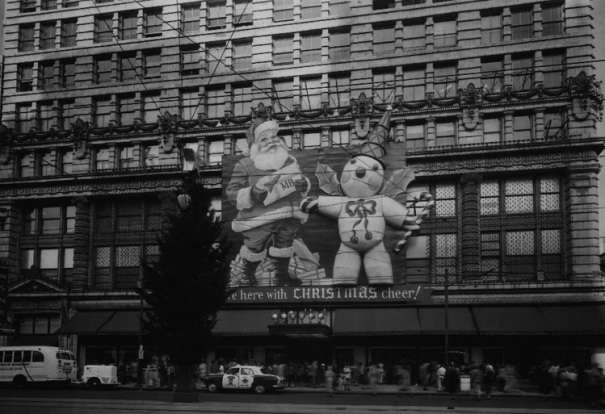 Created as Santa’s helper, Mr. Bingle (a little white snow fairy) had a high pitched squeaky voice, a snowman’s body, with round blue eyes and red nose, an ice cream cone hat, a red ribbon bow tie, candy cane-striped mittens, holly-leaf wings (so he can fly), and a candy cane in hand.

An enormous likeness of Mr. Bingle measuring 50 feet tall and 35 feet from mitten-to-mitten adorned the front of Maison Blanche during the holiday season.

Here are the lyrics to Mr. Bingle’s theme song:

Jingle, jangle, jingle
Here comes Mr. Bingle
With another message from Kris Kringle
Time to launch your Christmas season
Maison Blanche makes Christmas pleasin’
Gifts galore for you to see
Each a gem from MB!

As famous as Mardi Gras and Gumbo Mr. Bingle first appeared in 1948 when Mr. Emile Alline, a window-display manager at Maison Blanche created Mr. Bingle as the store’s advertising mascot for the holiday season. Emile Alline died in 1998 at the age of 81.

The Story of Mr. Bingle by Emile Alline

When Santa left his shop one day
He found a snowman near his sleigh.
“You’ll be my helper now,” he said,
And tapped the little fellow’s head.

The snowman found that he could talk—
“Look, Santa, I can even walk!”
And then he gave a little sigh…
“Oh, how I wish that I could fly!”

So, Santa gave him holly wings,
Then, looking through his Christmas things,
Found ornaments the very size
To make a pair of shining eyes.

Then Santa said, “You need a hat;
An ice cream cone’s just right for that.
And keep this candy cane with you,
You’ll see what magic it can do!”

The snowman laughed and sang a jingle,
So Santa named him “Mr. Bingle.”
That’s how it happened. Now he’s here
With us at Maison Blanche all year.

Visitors to Maison Blanche during the Christmas season watched a Mr. Bingle marionette show in the store’s front window courtesy of Edwin Harmon “Oscar” Isentrout – a former vaudevillian and native of Brooklyn, N.Y.- who was hired to bring Mr. Bingle to life for customers both young and old.

Istentrout also performed Mr. Bingle marionette shows at venues like local hospitals. He was assisted by Ray Frederick and Harry J. Ory. The puppet shows ended when Isentrout died in 1985 at the age of 61. He was buried in New Orleans’ Hebrew Rest Cemetery No. 3 on Pelopidas Street in Gentilly.

In addition to puppet shows and TV commercials, Mr. Bingle appeared on records, in books, on radio and in occasional TV specials. There was even a Mr. Bingle museum on the third floor of the store for a time. The popularity of Mr. Bingle inspired a line of Mr. Bingle plush dolls and related merchandise.

Each year since 2005, Mr. Bingle makes an annual appearance at Celebration in the Oaks in New Orleans City Park. He also appears as a float in the Krewe of Jingle parade during the holiday season.

NOTE: Isadore Newman founded Maison Blanche department store in 1897. Mr. Bingle got his name from Maison Blanche’s President Lewis Schwartz Jr.. Mr. Bingle’s name was derived from the initials for Maison Blanche. Dillard’s donated the original large statue of Mr. Bingle to be placed in New Orleans City Park. Their stores still sell Mr. Bingle dolls. Mr. Bingle made appearances at the White House as well at the 1989 Citrus Bowl in Florida. Fans of MB can follow him @MisterBingle on both Instagram and Twitter.