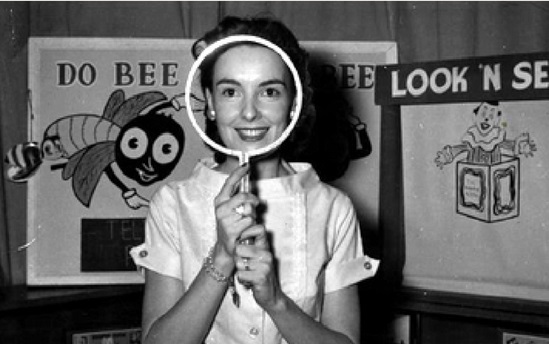 The  Romper Room Magic Mirror had a large hoop with a handle that was used by the various hostesses of the popular syndicated children’s program ROMPER ROOM. The program began with these words: “Pop goes the weasel, and the Jack-in-the-box jumps out of his house, and that means it’s time for the Romper Room school.”

From the 1950s through the 1990s, the Romper Room hostess ended each program by reciting the show’s signature magical chant:

With the chant spoken, the Romper Room hostess gazed through the empty mirror frame and recited the names of the lucky children whom she pretended to see watching the program (a different list of names each day). For example, “I see Tommy and Susan and Hannah and William and Mary and all you boys and girls out there.”

Of course, the hostess really couldn’t see the children, but to the kids at home, as they listened for their name to be mentioned, they knew that they were someone special, at least in the World of Romper Room.

NOTE: “Miss Nancy” (Nancy Rogers Claster) created the idea for Romper Room with her husband, Bert Claster. Nancy (who died in 1997 of cancer at age 82) hosted the nationally syndicated show first in Baltimore and then in Chicago.

In 1964, Claster’s daughter, “Miss Sally” (Sally Claster Gelbard) replaced her mother as the national host of the show. Other cities around the country hired their own female counter parts to host the show in their market areas.

Former Romper Room hostess Mary Ann King (in Los Angeles from 1966-76) was mugged in the parking lot of a Hometown Buffet in the City of Industry on December 17, 2003. The encounter gave King, 70, a broken arm, rib and punctured lung.

Besides her injuries, the thieves stole a black taffeta bag that contained the original Magic Mirror (white plastic mirror frame) used on the Romper Room program so many years. King began carrying the magic mirror around with her to satisfy the wishes of people who confronted her with the allegations “you never said my name.”

In the case of the criminals who stole the item, King confessed “I’m sure those hoodlums who did this just looked at the mirror and said, ‘What in the world is this,’ and just discarded it.”